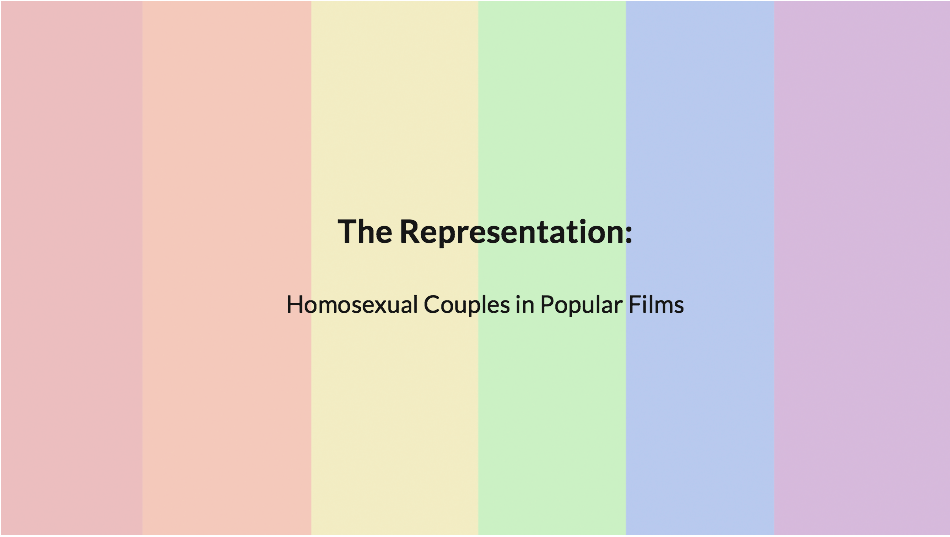 In this paper, I’ll be comparing the differences in representation of homosexual characters in popular films.

I will highlight the differences in characters of films created by people who don't have a perspective of how homosexuals are represented in the real world to creators who do have a perspective. I’ll be defining popular films as those that are well-known and liked in the Lesbian, Homosexual, Bi Sexual, Transgendered/Transsexual, Queer (LGBTQ+) community. My intent with this essay is to find how films portray homosexual characters.

Review of the Relevant Literature

When looking in to the representation of homosexual characters, I noticed that there hasn’t been much research done on the subject. In addition, what little research that has been done assumes the angle that homosexuals in media are portrayed as bad and evil people, which is clearly a gross misrepresentation. An example of misrepresentation within the genre of fantasy media such as in the TV Show True Blood is how vampires, werewolves, and other supernatural creatures are portrayed. Frederik Dhaenens suggests that:

… the genre has omitted representations of homosexual characters or displaced homosexuality onto the victims, villains, or nonhuman others. Hence, from a queer theoretical perspective, homosexuality has been represented as a threat to the hegemonic discourse of heteronormativity” - _ (Dhaenens, Frederik)_

This was interesting to me because in media that deals with homosexual culture, typically it’s about homophobia, homophobic violence, child molestation, cheating around, always having sex, femininity, even disownment of family due to religious reasons or just plain homophobia. When you look at how homosexual characters are represented in the fantasy genre be it in films, TV shows, books, comics, games, etc. it adds to the ‘fear’ that homosexual people are dangerous and a threat to heterosexuals (as stated by Dhaenens). On the other hand, Dhaences did another analysis of the popular (now off the air) TV series Glee and found that “… a significant increase in homosexual representation in contemporary television fiction, many media scholars argue that the representation of homosexual men and women is governed by heteronormativity” (Dhaenens, Frederik). As he quoted from M. Warner’s The Trouble with Normal:

(H)eteronormativity: If you are born with male genitalia, the logic goes, you will behave in masculine ways, desire women, desire feminine women, desire them exclusively, have sex in what are thought to be normally active and insertive ways and within officially sanctioned contexts, think of yourself as heterosexual, identify with other heterosexuals, trust in the superiority of heterosexuality no matter how tolerant you might wish to be, and never change any part of this package from childhood to senescence. - (Dhaenens, Frederik)

In other words, what Dhaenens and Warner are trying to say is that these TV shows don’t properly portray homosexual characters because they’re written and created by heterosexual males. In addition, they most likely don’t know for themselves what it’s like to be homosexual so they base their rendition off of other television shows and other forms of media. Dhaenens goes on and further brings forth a notion that:

… (T)he social and political visibility of the homosexual community is accompanied by homonegativity, homophobia, and homophobic violence … the improved conditions for homosexual teenagers to come out is concurred by recurring homophobic harassment and homosexual teen suicides …. - (Dhaenens, Frederik)

This can reflect in real-life and make the audience scared to come out and live their life freely if they’re a closeted member of the LGBTQ+ community. This can express to the heterosexual audience that it’s okay to throw homophobic slurs and have homophobic actions towards homosexual people, which is obviously not okay to do. Considering that media is still heavily governed by heterosexual people, I don’t see this changing anytime soon. Jay Poole states that:

… Often, such alternative identities (non ‘straight’ identities) are fraught with their own rules and boundaries and, for those whose lives don’t conform to such constraints, anxiety and depression often manifest, often creating significant clinical concerns. As identities become more fluid opportunities to feel displaced, confused, shameful, and anxious abound. Questions about how to fit into particular groups begin to be more difficult to address personally and clinically as identity categories are blurred. Here, the impact of particular media representations of homosexual males is considered from a queer perspective; queer being defined as different or out of what has traditionally or ordinarily been expected. - (Poole, Jay)

With this, when homosexuals and the LGBTQ+ community are misrepresented, it can cause major mental illness issues in LGBTQ+ people (especially in youths) which is not healthy. Therefore, the representation of homosexual characters in media is degrading, misrepresentative, and above all, can cause mental health issues. I’m going to be looking in to films that have been created by homosexual people who understand how to properly portray homosexuality. From that point, they can maybe change the way homosexuals are seen across all media!

As someone who identifies as homosexual, I can personally say that in different mediums LGBTQ+ people get misrepresented quite often as shown in the above literature review. Homosexuals are made out to be sexual deviants and not ‘good people’. However, that’s entirely untrue! We’re not sexual deviants and are not ‘bad people’.

With this, I wanted to see if I could find a selection of films that are popular that have been created with the proper portrayal of homosexuals in mind. Therefore, I’ll be looking in to the representation of homosexual characters in popular films. In particular, I'll be assessing how homosexual characters and couples are being portrayed and try to see if they're properly portrayed or if they’re being misrepresented like in media from heterosexual creators.

As I was finding my samples, I used the Internet Movie Database (IMDb) which is a website that has a ton of information in regards to films and TV shows. I used the advanced search function within IMDb to look for films that had the plot keywords of “Gay Couple” and “Romance”. I then sorted the results by popularity and watched each trailer a few times. From that point, I picked the five films that looked like they would have proper representation.

I watched each sample through its full entirety. I had the films on my secondary monitor, my protocol on the left side of my Macbook screen and the coding on the right side of my Macbook screen. During the coding of the film, I stopped multiple times so that I could code and make notes. I was also coding as the film was playing. With a few films, I wasn’t sure who I was coding for at the beginning so I coded for who I thought it was and then when I was wrong I paused the film and went back to re-code.

I coded five different film samples. I decided to code with the intent of having five major categories.

The first category was film. I simply looked at the movie title, year of release, the time period in which the film was set in, and which character(s) I was focusing on. (For full results, see appendix A).

The fourth category was characters. I looked at the “homosexual stereotypes” that were followed and if they showed any gender identity traits (such as being feminine or masculine). The stereotypes I looked at were:

I then further looked at how they were dressed and their age. (For full results, see appendix D).

Then in the fifth and final category, I looked at what happened throughout the film. I looked at if there was any homophobia, who said it (if said) and what was the result from the comment. I then finally looked at the linguistic theme of the film. (For full results, see appendix E).

My findings are quite different then I originally thought they would be. I went in thinking that I was going to find movies that were all about cheating, homophobia and sex like I saw in the literature that I read. However, the samples that I picked surprisingly did not have any of those things.

When the characters were coming out I noticed a wide variety of reactions from their families, friends, co-workers, schoolmates or whoever they came out to. The reactions ranged from being dramatically excited, supportive, in denial, homophobic, violence, shock, disgust, upset, angry, religious, loving, happy, accepting, and becoming close friends from being strangers.

In The Perfect Wedding, it did start off with Paul being a cheating boyfriend, however by the end he ‘redeemed himself’ and became a loyal boyfriend.

In the film’s White Frog and That’s What I Am, there was a bit of homophobia but nowhere near the amount that I thought there would be. In Beneath the Skin, they did display a huge amount of homophobia and violence directed towards the homosexual couple. From the homophobic actions, I noticed that as a result a character almost got fired, the brother ran away from frustration and confutation and the parents tried to shut down a community service centre; the parents disowned their dead son, a lot violence towards their son, they kicked him out of the house and then his apartment later got trashed.

Like stated above, I decided to choose samples that have been created by people who understand the representation of homosexuals in real life. What I found is that they had a proper representation of homosexuals, whereas with popular media created by heterosexual there were a lot of misrepresentation in pertinence to the LGBTQ+ community and homosexual people. By doing this, they’re giving the LGBTQ+ community a bad representation and like stated earlier give homosexuals a bad reputation. This ends up in creating more homophobic behavior. With this, I think that a lot of heterosexuals should take a few steps back and actually look at how homosexuals exist and act in real life and not how they behave in other media. Doing this would create less misrepresentation and people may not ‘fear’ homosexual people as much! As I was doing the coding for the methodology part of the paper, I found that I would have to make a judgment call and code for what was in front of me. There was some biased thinking when coding. For instance, when coding for the gender identity traits and the stereotypes, I didn't know their ‘full story’ so I just went by what I saw.