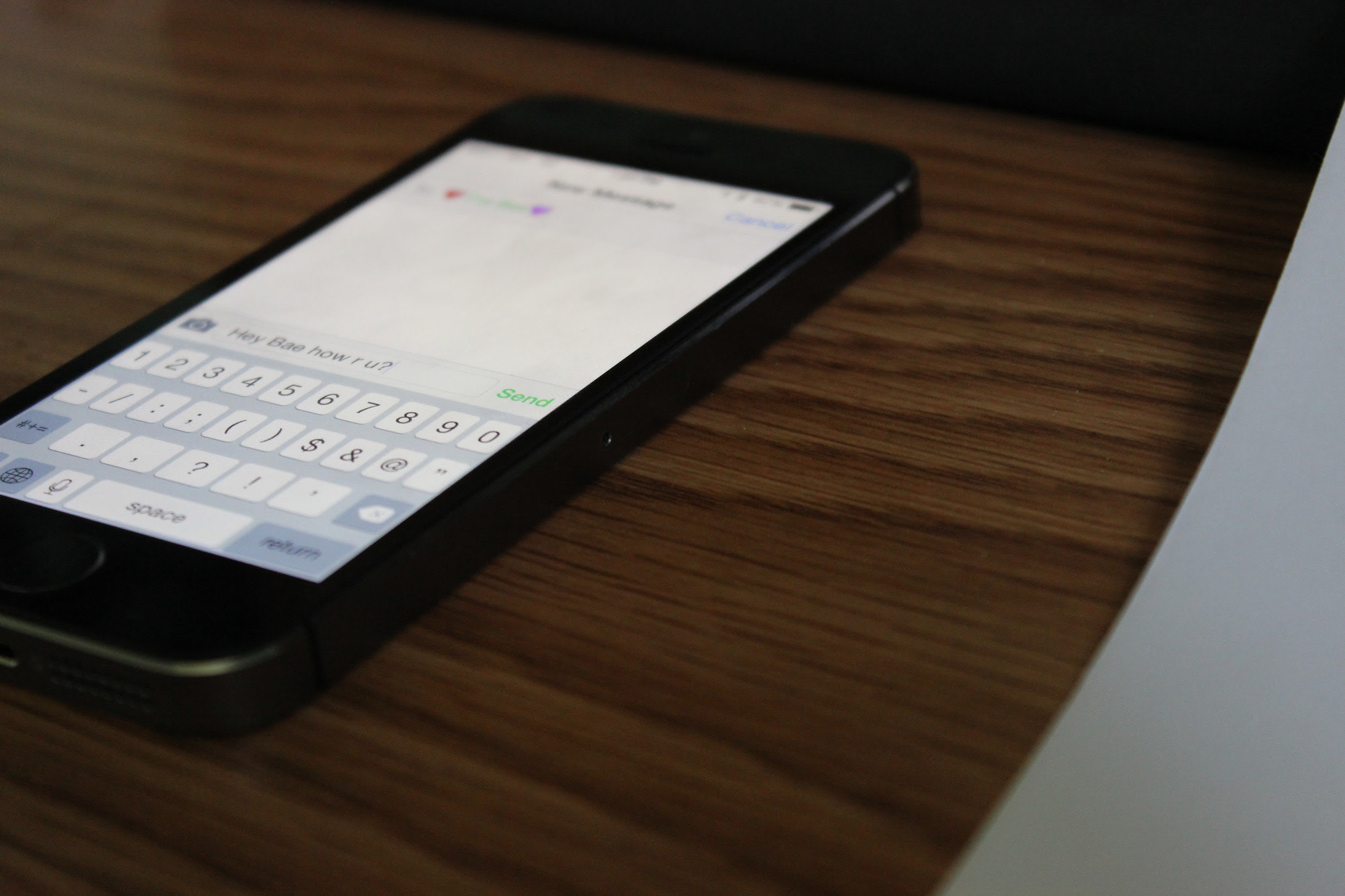 Technology Changing The Way We Communicate

The Co-Existence in Mass Media Forms: Technology Changing The Way We Communicate

With technology advancing and new ways of communication being invented and always changing, the way we now communicate is so different from the “old messenger system”. In addition, with such things as cell phones and social networks, we are now presented with more easier ways of communication. However, with that begin said, people are now getting “lazy” and using things such as abbreviations, poor grammar, emojis and an over reliance on auto-correct (even if we all hate it).

The "new" way of communication in todays day and age has changed in many ways and in such a short time. Nowadays, “[anyone] [has] a wider variety of options for communicating with their peers than was available 15 years ago” (Conti-Ramsden & Durkin et al., 2010, p. 197). In addition, with digital technologies such as cell phones and the Internet, communication is now widely accessible and also very poplar, by many people which is mainly seen with in teens; but those of the older generations, are beginning to adapt and are learning how to use this technology, which is slowly eliminating the old “messenger delivery method” (Conti-Ramsden & Durkin et al., 2010, p. 197). For instance, the old way of communication was sending letters and or post/general card via. the mail system (or now called “snail mail”), which took time to reach the receiver; where with digital technology we can get a message instantly. Which, now “[…] messages [can] travel faster than a messenger” (McLuhan, 1995, p.89). According to a survey conducted by CTIA & Harris Interactive (2008),

[...] over 2,000 teenagers in the United States revealed that 80% of teens, or approximately 17 million young people, have a cell phone. The figures are very similar for teenagers in the United Kingdom: Approximately 90% of adolescents own a cell phone; 96% of these use SMS (short messaging services), and 1 in 10 spends more than 45 minutes a day using it” (as cited in Conti-Ramsden & Durkin et al., 2010, p. 197).

As Nicholas Negropnte said, in time, “we will find that we are talking as much or more with machines than we are with humans. What seems to trouble people most is their own self-conscious about talking to inanimate objects” (as cited in Postman, 1999, p. 41). We are becoming so attached to our technology that, people are starting to feel that, if they leave their homes with out their cell phones, they feel as if they were leaving with out cloths on (Conti-Ramsden & Durkin et al., 2010).

As this new technology gets invited and communication changes, we as a society change. “As technology advances, it reverses the characteristics of every situation again and again. The age of automation is going to be the age of "do it yourself” (Rajendra, 2014, p. 1). In the nineteenth century, the following invention, were produced and is now being seen as something that is wracking our culture as we know it:

telegraphy, photography, the rotary press, the telephone, the typewriter, the phonograph, the transatlantic cable, the electric light, movies, the locomotive, rockets, the steamboat, the x-ray, the revolver, and the stethoscope, not to mention canned food, the penny press, the modern magazine, the advertising agency, the modern bureaucracy, and even (although some dispute it) the safety pin“ (Postman, 1999, p. 39).

It can be said that, “[cell] phones afford what can be broadly categorized as two principal routes for interaction: oral communication and text-based communication via SMS and similar technologies” (Conti-Ramsden & Durkin et al., 2010, p. 197). We now live in a world, as pointed out by Postman, where, meanings to certain words are different from the original meanings such as the words “community” and “conversation”. The world

[…] ’community’ is now used to mean, simply, people with similar interests[, which is] a considerable change from an old meaning: A community is made up of people who may not have similar interests but who must negotiate and resolve their differences for the sake of social harmony. […] As for ‘conversation,’ two (or more) people typing a messages to each other are engaged in an activity quite different from what is usually called a conversation. To call messages that lack the presence of the human voice and human faces a “conversation’ […]” (1999, p. 53).

As time goes by the meaning of words get changed or even to some extreme, people can create a different spelling of the word, creating a “new feel” to the word. Another example of this would be when someone “Tweets” in today’s age that would mean that they send out a short message (under 140 characters) on the social network, Twitter; where even a few years ago, it would be considered to be and only be the sound that a bird makes. “Needless to say that like any other aspect of development, the technological development is similar to a double edged sword which on one side can kill someone and on the other side can lead to one’s own protection” (Rajendra, 2014, p. 6).

As Postman noted in his read, “[what] changes in language are being enforced by new technologies, and what is being gained and lost by such changes” (1999, p. 53)? This is true when you think of social networking, instant messaging (IM), or even text messaging (SMS). People nowadays, uses short texting (also known as, abbreviations) and poor grammar. This is due to the fact that, with these new forms of communication, you are expected to reply back instantly. Furthermore, with certain social networks, you can have whats called, a “Character Limit”. Take the example of Twitter, with there limit being 140 characters; which then leads to people tweeting out tweets that are filled with abbreviations and ungrammatically correct language.

With the use of abbreviations, it cuts down on the charters and can make it easier to look at a message. An abreaction can be something as easily as “BRB” (Be Right Back), “U” (You), “Y” (whY), “YOLO” (You Only Live Once), "LOL" (Laugh Out Loud), "L.O.L." (Lots Of Love), “TMI” (Too Much Info), and many other shorten words. However, you can get some people that just simply does not know how to use the correct abbreviations; and then you are stuck there trying to decrypt there message and to try and figure out what they are trying to say.

Some people may even call this a “[…] nineteenth-century Americans, technology [that is] clearly the engine of spiritual progress” (Postman, 1999, p. 38). Abbreviations and bad grammar, is now seen everywhere, from on “Tech” (Technology), the way we talk “F2F” (Face To Face), essays, in school, and other places where you see communication. However, with this all being said, all this “[information] and communication technologies have transformed our world in many ways” (Pikas, 2006, p. 3).

Another, thing that should be mentioned, is "Auto-Correct" (or even better known as, Damn Auto-Correct). Auto-Correct is when you are in the middle of typing something (a text, Facebook status, tweet, email, or a note) and you may have one wrong letter or not the proper grammar and then auto-correct comes in and totally changes everything. At times, auto-correct can be handy a fix your grammar and at times even know what you were wanting to say (which is how its programmed to work), however, most of the time it gets it completely wrong. For instance, one could be typing, "I love you to!" but auto-correct could correct it and place, "I love you too!" or it can go the complete other way and get it wrong and say, "I love you TiVo!" (If you want a good laugh, just search on google for, auto-correct fails). Another example could be, you typed "skilks" and it corrected it to "skalds" but when you were wanting "skills".

In addition, to abbreviation, poor grammar skills, and auto-correct, our language seems to be filled with smile faces and other "Emojis". Emojis are starting to take over the way we communicate. Which can be a good thing, because it gives "emotion" to the text. Like someone can type "Hey :)" and then the "receiver" knows that the "sender" is in a good mood, or they could have typed, "Hey :|", which would mean that they are in an okay mood, or they could even type "Hey :(" and that would mean that they are in a bad mood.

We now live in a world where the use of improper language (abbreviations and poor grammar) is okay and excepted as “passable” language. We are re-creating words and making them shorter and re-creating the meanings behind them. We are making sentences with less characters so that it fits in a tweet. Most of all, with auto-correct, it’s creating a lazy feeling and corrects you as you type (even if it gets the word completely wrong).

Concept One: Is the new form of communication (such, as abbreviations, poor grammar, auto-correct and emojis), a good thing or a bad thing? Why or why not?

Conti-Ramsden, G., Durkin, K. & Simkin, Z. (2010). Language and social factors in the use of cell phone technology by adolescents with and without specific language impairment (SLI). Journal Of Speech, Language, And Hearing Research, 53 (1), pp. 196--208.

Postman, N. (1999). Chapter 3. Technology. Building a bridge to the 18th century: How the past can improve our future. New York: Vintage.

Conti-Ramsden, G., Durkin, K. & Simkin, Z. (2010). Language and social factors in the use of cell phone technology by adolescents with and without specific language impairment (SLI). Journal Of Speech, Language, And Hearing Research, 53 (1), pp. 196--208.

Postman, N. (1999). Chapter 3. Technology. Building a bridge to the 18th century: How the past can improve our future. New York: Vintage.