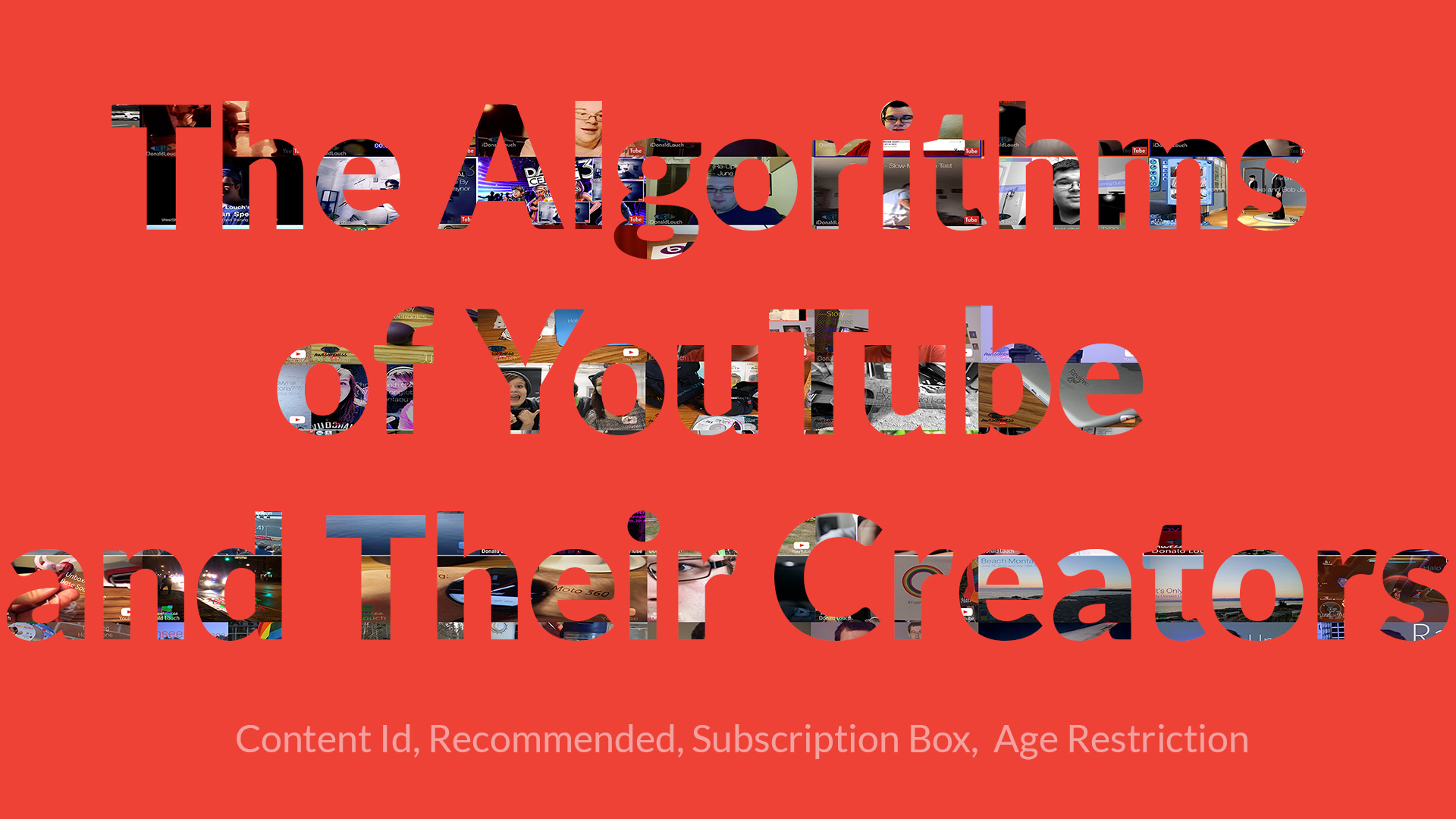 What is YouTube’s algorithm system, and how does it affect YouTube Creators?

When we think of algorithms, the first thing to look at is the what the word is and how it’s being used by YouTube. Algorithms are “a process or set of rules to be followed in calculations or other problem-solving operations, especially by a computer” which is from the Greek word “arithmós” meaning “numbers” ("Algorithm - Definition Of Algorithm In English | Oxford Dictionaries"). YouTube uses algorithms to find videos that may be infringing on copyright laws. YouTube further uses algorithms to help viewers find similar videos and videos they may like. There are currently some major positives for content creators and viewers with the current algorithms systems that are in place. However, there’s also some major problems with the current algorithm systems that have seriously affected content creators. Including a brand-new algorithm system that’s affecting the Lesbian, Gay, Transgendered, Queer (“LGBTQ+”) community.

With YouTube’s Content ID algorithm, it further, uses other manual administrator processing alongside the automatic system, “a video identification tool allows copyright holders to easily identify and manage their content on YouTube” (Chung, MyoungBeom, and IlJu Ko 385). Content ID is further described as an “… internal computer algorithm system that allows copyright holders and content creators to detect possibly infringing videos” (Zapata-Kim, Laura 1848). However, one fatal flaw in this system is that if “… the video encoding has changed in resolution, bit-rate or codec, [the] techniques (of Content ID) do not perform well” (Chung, MyoungBeom, and Il Ju Ko 383).

Furthermore, YouTube and their Content ID system “… is exempt from liability for removing lawful videos under a safe harbor provided by the Digital Melamine Copyright Act of 1998 (“DMCA”)” (Zapata-Kim, Laura 1847). In other words, YouTube is always going through videos that get uploaded and if the system sees that any footage or audio in a video is like another and has been claimed with YouTube, they will flag said video. With this, it provides content creators with the peace of mind that if their content gets used by someone else on the network, they will get the ability to remove the video or even make revenue from it. However, there are some problems with this system in pertinence to its accuracy. Many videos get incorrectly flagged and claimed. It’s also been said that:

… hundreds of thousands of … videos are removed from the Internet by automatic computer algorithm systems that flag them as alleged copyright infringement. Although some of those claims are meritorious, many are not - (Zapata-Kim, Laura 1848).

Another aspect that should be looked at is the algorithm system that’s in place for finding similar videos for viewers to watch. With the addition of subscription boxes. This content recommendation algorithm system can be described as “… the Least Recently Used algorithm ([“LRU”] for short) to evict the latest recently watched video” (Lee, Ming-Chang et al. 1523). With the LRU algorithm, it can “... cause a poor service quality for YouTube since those videos need to be retrieved from the remote back-end database” (Lee, Ming-Chang et al. 1523). As Canadian YouTuber Corey Vidal told Nora Young on CBC’s The Current, a total of around 300 to 400 hours of videos are being uploaded every single minute on YouTube (Young, Nora). With this on YouTube theirs over “20 million viewers daily and a total viewing time of around 10,000 years (since) August 2006” (Abhari, Abdolreza, and Mojgan Soraya 91). YouTube can then use the LRU to consider the different algorithm and formulate the viewer’s favorite videos based on what they’ve already seen to “show users viewpoints that they already agree with” (Bessi, Alessandro et al. 1). It’s been thought that “YouTube promotes videos through Watch Time, which prioritizes videos that lead to a longer overall viewing season over those that receive more clicks” (Bessi, Alessandro et al. 1).

In other words, YouTube has built an algorithm system which will recommend videos to the viewers based on what they have searched for as well as what they have viewed. For the most part, this algorithm system functions correctly and can suggest similar videos with surprising accuracy. With this, viewers can find themselves immersed in hours and hours of watching funny cat videos or fail montages! However, the system can also create recommendations that aren’t relevant to the tastes of the viewer and suggest videos that are way off from what they watch and search for.

Another aspect of algorithms that YouTube uses is the algorithm system of their subscriber boxes. When people subscribe to a channel they’re asking YouTube to alert them when new content is posted to said channel and to add that channel’s videos into a feed in their subscriber box for easy access.

This offers a variety of benefits for both content creator and viewers in a multitude of ways! For the content creator, it allows their videos to be seen right away by their loyal subscribers/viewers and will increase the creator’s viewer counts and statistics. For the viewers, it allows them to see content right away from their favorite creator. Subscriber boxes further give content creators the ability to let their loyal subscribers know of upcoming LIVE Streams, Questions and Answers segments (Q&A for short), and other quick updates that will be happening in the near future. This is assuming that the subscriber box system works, which isn’t always the case.

Unfortunately, the algorithm system used for the subscriber box that’s currently in place is essentially broken and has been for years. There are multiple occasions when content creators upload content but their subscribers aren’t alerted. There are also times when videos will show up in subscriber boxes hours later, and by that time they’ve plummeted down the content feed as other creators upload their own videos. This can cause content creators viewership to suffer and diminish. This has caused content creators to plead to their subscribers, asking them to make sure “upload notifications” have been turned on so the viewer gets notified whenever a new video is posted. Content creators have now been forced to use their social media tools like Twitter to promote new content on their channel.

As I was writing this paper a brand-new algorithm system got introduced on YouTube and has caused major issues in the LGBTQ+ community. YouTube is currently age restricting most of all the LGBTQ+ content on their site. What this means is when age restricted mode is activated, viewers won’t be able to find any LGBTQ+ content.

These “age restricted” videos are reportedly being restricted due to their “sexual” theme when in fact most of the videos aren’t sexual themed and are helpful for the LGBTQ+ community/people questioning their sexuality. One of the main reasons people aren’t happy about this is the same level of “sexual” content contained in heterosexual couple videos are still being displayed in restricted mode. I can attest to this, as three of my own videos (my original Coming Out video, my Boyfriend Tag, and a let’s play of The Sims 3 where I have two male characters’ kiss and become a couple) have been aged restricted.

YouTube has commented on this and states that “we are so proud to represent LGBTQ+ voices on our platform—they’re a key part of what YouTube is all about. The intention of Restricted Mode is to filter out mature content for the tiny subset of users who want a more limited experience. LGBTQ+ [videos] are available in Restricted Mode, but videos that discuss more sensitive issues may not be” (Creators, YouTube). They then went on to say that “[sorry] for all the confusion with Restricted Mode. Some videos have been incorrectly labeled and that’s not right. We're on it! More to come” (Creators, YouTube).

YouTube has algorithm systems in place that are used for copyright protection, recommended videos, subscription boxes, and the newly implemented age restriction systems. These various algorithms allow content creators to have peace of mind when uploading created content and also helps viewers more efficiently filter through content to find things they enjoy. However, the accuracy of these different algorithms leaves something to be desired as many videos are falsely flagged under copyright laws and age restriction settings. While there are some flaws with YouTube’s algorithms and how they organize content, with some iteration these flaws can be ironed out and overall please content creators as well as viewers.